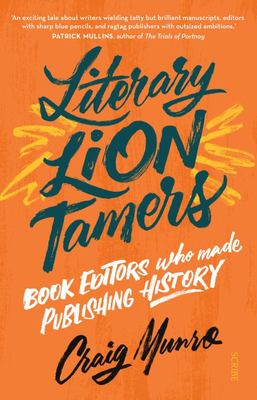 'Writers, their friends, enemies, editors, and publishers began to materialise out of the library's archive boxes, and I found myself setting off in search of these elusive, eccentric, and often quarrelsome characters.' In this unique and entertaining blend of memoir, biography, and literary detective work, highly respected former fiction editor Craig Munro recreates the lives and careers of Australia's most renowned literary editors and authors, spanning a century from the 1890s to the 1990s. Famous figures featured in this book include A.G. Stephens, who helped turn foundry worker Joseph Furphy's thousand-page handwritten manuscript into the enduring classic Such Is Life; P.R. Stephensen, who tangled with the irascible Xavier Herbert, working closely with the novelist to revise his unwieldy masterpiece Capricornia; Beatrice Davis, who cut Herbert's later novel Soldiers' Women in half, and whose lively literary soirees were the talk of Sydney; and award-winning fiction editor Rosanne Fitzgibbon, who was known as a friend and champion to her authors, including the prodigiously talented young novelist Gillian Mears. Throughout it all, in beguiling and elegant style, Craig Munro weaves his own reminiscences of a life in publishing while tracking down some of Australian literature's most fascinating and little-known stories. Literary Lion Tamers is a delight for anyone interested in the wild outer edges of the book world.