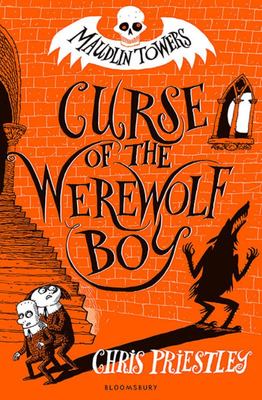 Welcome to the weird and wonderful world of Maudlin Towers. Hugely funny, deliciously creepy and action-packed by turns, this brand new series from Chris Priestley is perfect for 8+ readers who like their mysteries with a bit of bite. Fans of Lemony Snicket and Chris Riddell will love Curse of the Werewolf Boy

Chris Priestley worked as an illustrator and cartoonist for twenty years before becoming a writer. His books have been nominated for many awards including the Edgar Awards, the UKLA Children's Book Award and the Carnegie Medal. The award-winning and critically acclaimed Tales of Terror series for Bloomsbury features chilling stories rooted in the tradition of M.R. James, Saki and Edgar Allan Poe and are available in many languages. Mister Creecher is a novel inspired by, and linked to, Mary Shelley's Frankenstein and The Last of the Spirits tells a story that weaves in and out of Charles Dickens' A Christmas Carol. Curse of the Werewolf Boy is the first title in Chris's new Maudlin Towers series. Chris lives in Cambridge with his wife and son. chrispriestleybooks.com